Jakarta, 26 March 2021 – PT Surya Esa Perkasa Tbk (IDX: ESSA) (“ESSA”), a listed company engaged in the Energy and Chemicals sectors with businesses in LPG (liquefied petroleum gas) refining and Ammonia production announced its new brand identity today. The Company held a virtual launch ceremony for its new identity which was attended by all employees at its two production locations and Head Office, along with members of the Board of Directors and Board of Commissioners. This new brand identity applies to all ESSA entities and subsidiaries, including PT Panca Amara Utama (“PAU”). All Companies shall utilize the new identity effective 26 March 2021, as follows: 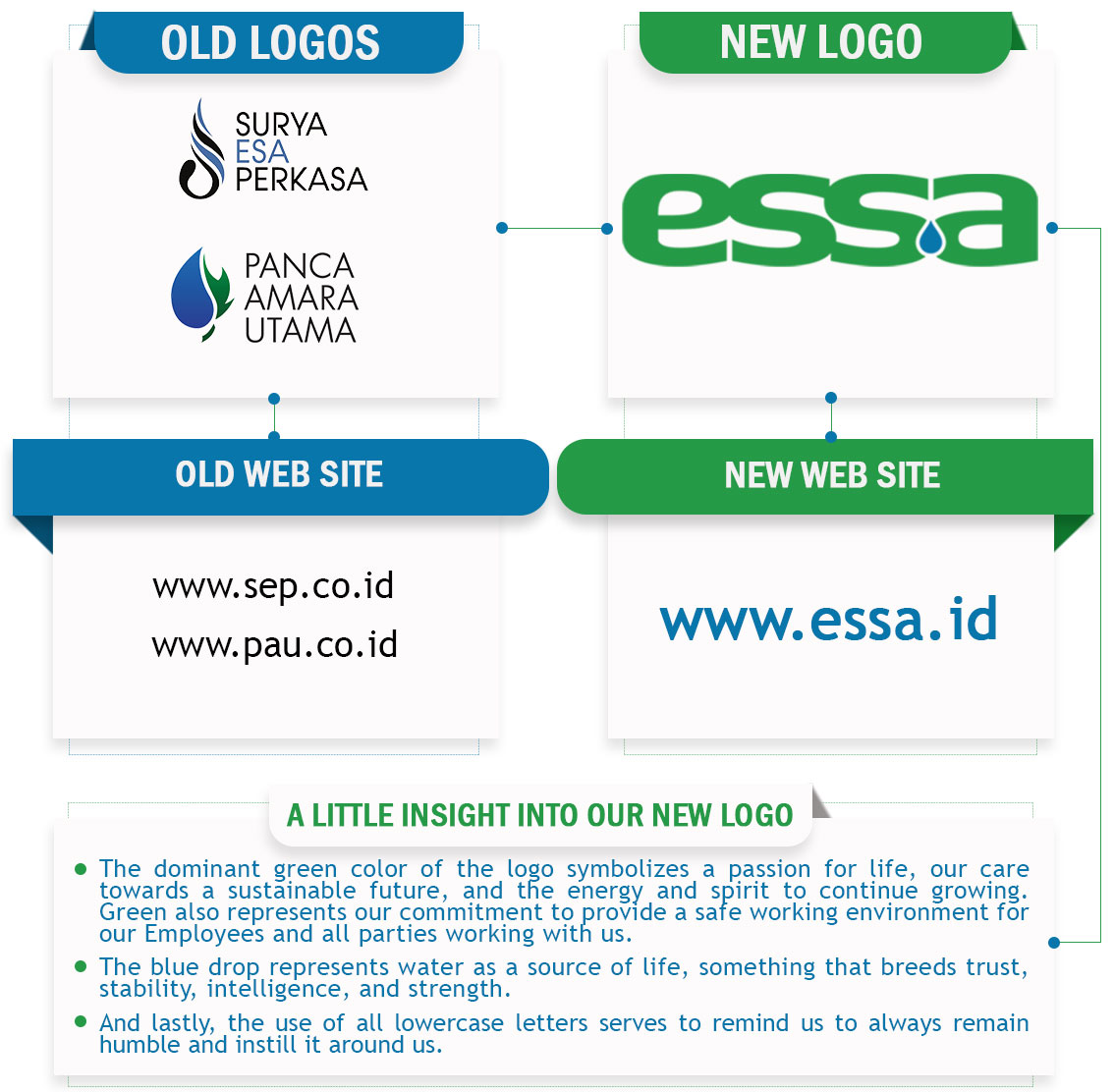 President Director & Chief Executive Officer of ESSA, Vinod Laroya revealed, “ESSA means One. It reflects our collective desire to be united, to be the best in what we do, and to always do so with humility. It represents our desire to always contribute as One for Indonesia.”

The process of changing the identity is based on the ESSA Brand Identity Certificate dated 2 September 2020 from the Directorate General of Intellectual Property, Ministry of Law and Human Rights. Please note that this Brand Identity change shall have no impact to the Company’s legal standing as an entity, or on the Company’s ongoing agreements and commitments with any Party.

Vinod Laroya continued that through this new brand identity change, the Company hopes to provide new enthusiasm and energy for the Company to continue to grow and provide added value to Indonesia’s resources. “This is reflected in the recently signed MOU for the development and production of Blue Ammonia. Through Blue Ammonia, we hope to pave the way for the Company to be at the forefront of providing future fuel for Indonesia, “he concluded.

PT Surya Esa Perkasa Tbk (“ESSA”) is a listed company engaged in Energy and Chemicals sector with a business portfolio in the field of LPG (Liquefied Petroleum Gas) refining and Ammonia production. Established in 2006, ESSA has been listed on the Indonesia Stock Exchange (IDX) since 2012. Through its subsidiary, PT Panca Amara Utama, ESSA is one of the largest Ammonia producers in Indonesia and represents the first application worldwide of the latest KBR Reforming Exchanger System and Purifier Technology.

With increasing emphasis on global sustainability, Blue Ammonia is emerging as a low carbon fuel alternative. In March 2021, ESSA (through PAU) signed a Memorandum of Understanding (MoU) on Carbon Capture, Utilization and Storage (CCUS) for Blue Ammonia Production in Indonesia with Japan Oil, Gas and Metals National Corporation (“JOGMEC”), Mitsubishi Corporation (“MC”), and Institut Teknologi Bandung (“ITB”). With its Blue Ammonia commitment, ESSA paves the way for Indonesia to play a leading role in the future with low carbon fuels.